Sometimes I feel like the life that is portrayed here on my blog is full of adventure. But here is what happens when Zach is in town for an evening. Maybe not adventurous, but funny, nonetheless. I like that Zach guy. He is good times.

Remember the time I went to Santa Barbara?

A few weeks ago I went to Santa Barbara with some friends. We did a lot of relaxing and touring while we were there. Here are a few snapshots of the things we did while there over the long President's Day weekend.
I think I want to make goal to see all of the missions in California by the end of 2011. Maybe I'll put it on my list of resolutions for next year. More on that later. We went to the mission in Santa Barbara though and it was pretty nice. Here we are standing in front of a statue of Junipero Serra. I guess if you are from California, you would be super familiar with this name since there are Junipero Serra streets everywhere here. I just found out 2 seconds ago that he was from Mallorca. Note to self: Check out his birthplace next time you go to Mallorca. 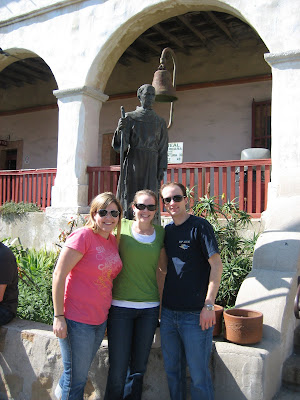 After going to the mission, we were all in the mood for a good taqueria. Lucky for us, Laura knew of one, so we quickly were on our way there. Unfortunately, we had to wait for about an hour in line, but it was pretty good. We didn't get any photos of the line and the food. Shame. After our tacos, we decided to go sea kayaking. 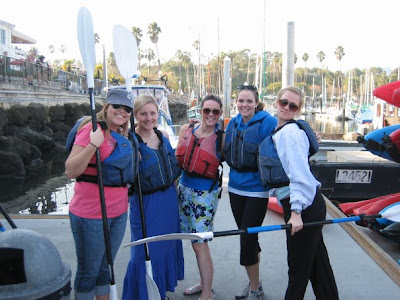 Steve and I were quite the pair. We weren't the best at navigating our sea kayak, but we had a great time and I got soaked. And you can see a great view of Santa Barbara from the ocean in the below photo. Yep, it was February 13th and we were sea kayaking with shorts and t-shirts on. Santa Barbara, your weather is my favorite thing ever. 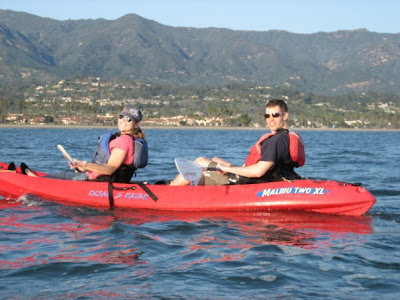 On Valentines Day, Zach came up from LA to hang with us and entertain us. We stayed in this crazy rental house that we think was actually someone's primary residence that they just rent out on the weekend. In the TV room, there was a basket of instruments, so we put together a little band and Zach made up a song. Apparently, I think Zach is funny. 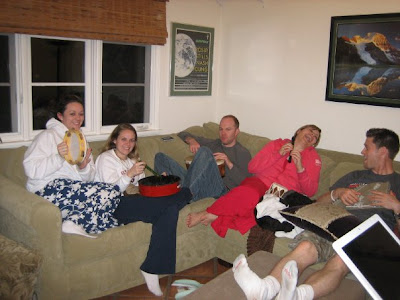 And on our way home on Monday afternoon, we made a few hour pit stop in Solvang. Have you ever been there? I wish I had more photos. If Rachael sends me any of her photos, I will update you accordingly. It is this little Dutch town about an hour away from Santa Barbara and quite close to Neverland Ranch. Very touristy, but I'd say that this is one of the places in California that is a must see. It isn't very often that you feel like you're in the middle of Epcot without the humidity. 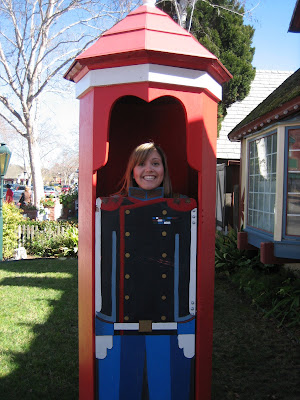 Dear Santa Barbara,
I will come back to you soon. Don't you worry.

Do you remember from a few years ago when I posted this? Well, I had some friends who invited me to Yosemite for round 2 of cross country skiing. I, being the smart girl that I am, decided to give snow-shoeing a go this time since the skis didn't turn out to be my friends the last time. And boy am I glad that I made that decision. 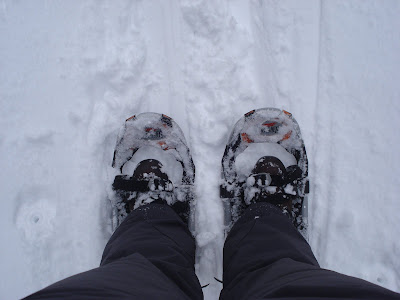 I was the only one who decided to snow shoe and so for the better part of the day, I was off in the woods by myself. Quite enjoyable, actually. The self portraits might not be the most flattering, but the photographer was the only one around and her prices were good. 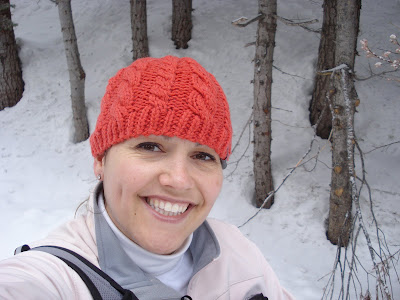 Too bad I don't have any pictures of Santa Barbara from last weekend to show you yet. Quite a contrast in weekend vacations. From 77 degrees and sunny at the beach to quite cold and foggy in the mountains. Yes, I am living it up in California. Let me tell you. 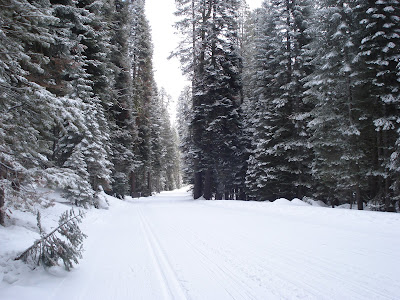 Jane and Lauren were ahead of me for a little while, so I snapped this shot of them and it turned out quite nicely if I do say so myself. Definitely gives you a better perspective of the size of the trees than the previous photo does. 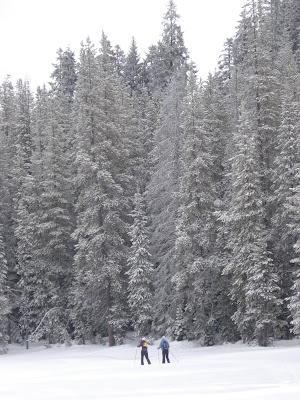 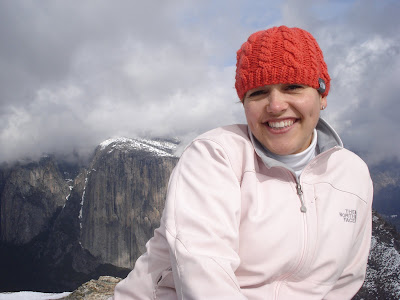 And for some proof that I have friends, here I am with Yana and Rich. 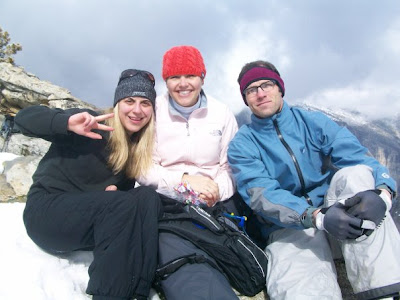 And further proof that I was ready to get back on the shuttle and go back to our deluxe tent cabins. 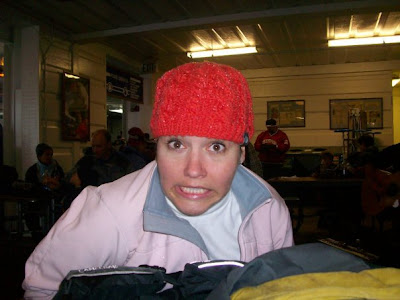 Yes, the hype over this website is a few years old. Luckily, I have some awesome coworkers who are supportive and want to get in shape with me. We are doing the push-ups and the squats. We are already on week 2, but does anyone else want to do this with us?
In other news, I'm heading to Yosemite for the weekend to participate in some winter sports. I'm not sure I'm ready for this, but it has been nice knowing all of you.
on Friday, February 19, 2010 1 comment: Links to this post

i have a crush on someone.

What have I done? 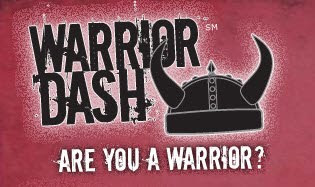 This morning I signed up for this. The only explanation for my bout of insanity is that my friend Kristine will be celebrating her 30th birthday a few days afterward, and this is how she has chosen to celebrate. And if that is how she wants to celebrate, so be it.

The next few weeks I will be attempting to get in shape as much as I can. Luckily, I have a few very supportive coworkers and we have started doing this together. I even put it on all our work calendars today so that we will make sure and do it. I feel like even if I started doing all of Rita's workouts for this, I still wouldn't be ready.

In other news, I am going to Santa Barbara for the long weekend. It will be about 70 degrees and sunny the entire weekend. Since it has been raining and cold here for the past 9 months, I am looking forward to it.
on Friday, February 12, 2010 1 comment: Links to this post

You asked for it.

Angie asked for an update on Darrel the other day. I don't have a lot to say because there isn't much to say. The second time he called, the conversation was extremely brief. I told him that I'd like to talk to him while he is on leave sometime this month and he told me that if he is alive, he'll do his best to call me. Some of you know that we had some financial matters to work out and for the record, the money has been sent and he sent me interest.
Yesterday, the following article was in the UK Telegraph: click here. And today, this one was in the Express. click here.

I realize that many of you out there have mixed feelings about Darrel, but I would appreciate your prayers in his behalf for the next few days. I don't know what is going to happen with us when he gets home, but I just want him to get home. 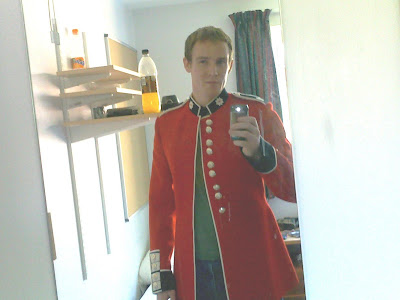 In case you're curious what plays on my ipod on repeat these days, it is this.
on Monday, February 08, 2010 3 comments: Links to this post

things i learned this weekend

1. i watched the movie 'the way we were' on saturday morning. i didn't totally hate the movie, but i hated barbra streisand's character. why does she have to be so obstinate all the time? i found it highly annoying. lesson - don't be obstinate just to be obstinate. not a becoming quality.
2. what do you do when you invite two men over for dinner? well, you act like you are on a date with both of them, of course. ha. lesson - if you'd like for one of the men to be a date for your friend, have her invite him next time. haha.
on Monday, February 08, 2010 No comments: Links to this post

I was showing a friend today how to look up people's radio stations in Pandora so that she could listen to my new-found favorite Broadway Musical station. The best thing about looking up your friends is that you can see what they have been listening to lately.
A lot of people are predictable:

And some surprised me with their Toby Keith station...

And their love for Ke$ha & Womanizer....

And maybe I have some friends who are beach bums and are trying to have a baby....

And um....I cannot explain the Love Songs on this playlist. But it makes me laugh everytime I see it on here. Seriously? Love Songs?

And this definitely wasn't a shock. Some things never change, do they, Dan.

I think that what people listen to on Pandora is very telling since most listen to it alone. I would just encourage you to all keep listening to what you love the most so that I can keep on judging you and calling you out in front of the internets.

Happy Friday.
on Friday, February 05, 2010 No comments: Links to this post

Procrastination at its finest.

I usually get a reminder from my roommate that it is time to update my blog, but I haven't had an email or an IM like that for some time. I just realized today that "oh yeah. I have a blog."
My picture taking skills lately have been limited to various projects I have been working on such as painting some of the common areas in my apartment or other craft projects that you will see more of later. I wish I could resolve to do better, but I probably won't. :)
Last weekend my mother was in town and nope, we didn't take a single photo. Zach was also in town on Friday, so we went to our favorite Indian restaurant where we learned that Indian food is too spicy for my mother and that we are sick of the rain in this town. On Saturday, we brunched with my girlfriends and then shopped until we dropped. My mom wanted to buy some brown boots and what we realized after hours of scouring DSW, Bloomingdales, Aldo, Nordstrom, and Macy's, is that she has something VERY specific in mind and it is a little late in the season to be shopping for boots. Never fear - we did get my mom 2 new dresses and I got a cute jacket and sweater on sale at Nord's. In the evening we went to see Wicked, which my mother had never seen before. I hadn't been in about 5 years, so it was great to see it again and enjoy it with my mom. Just as I knew she would, she loved it and laughed her way through the show.

The rest of the week has had the following highlights:
And now for the lowlights:
Ok your turn to comment on my life.
on Thursday, February 04, 2010 3 comments: Links to this post

Steph
"Maybe all we can hope to do is end up with the right regrets." - Arthur Miller. I'm hoping to end up with as few as possible. Here's my proof.

i heart my fam

random sties that i enjoy